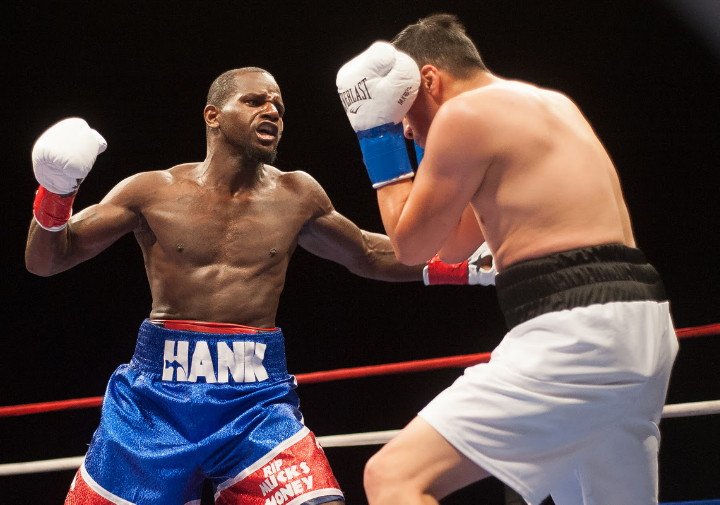 A lot of people think “Hammerin’” Hank Lundy is a little crazy, including his doctor, especially after Lundy returned to the gym to start hitting the heavy bag just three weeks removed from major knee surgery.
To survive and advance in the sport of boxing, one must be a bit bold – a little daring now and then – and be unafraid to take risks. The 32-year-old Lundy (26-6-1, 13 KOs) has never backed down from a challenge or shied away from confrontation, whether it’s moving up to an entirely different weight class to challenge one of boxing’s best pound-for-pound fighters for a shot at a world title or traveling more than 5,000 miles to Europe to face an undefeated prospect in his own backyard.

On Friday, Dec. 30th, 2016, boxing’s most feared road warrior fights for the Universal Boxing Federation (UBF) World Lightweight Title in a 12-round bout against 24-year-old California native John Delperdang (10-1, 9 KOs) at the B.O.O.M. Fitness Center in Cincinnati, presented by B.O.O.M. Promotions in association with CES Boxing, only eight months after underdoing major knee surgery to repair a torn ACL.
The most important sidebar in all this, aside from Lundy’s long-awaited return, is the Philadelphia native’s official campaign for a major world title at 135 pounds. No longer lamenting the fact most lightweights refuse to fight him, or stepping up to 140 for a lucrative, high-profile bout, Lundy will instead press the issue in 2017.

Those who’ve successfully avoided him in the past will be forced to face the music as Lundy continues to climb the ladder in the competitive 135-pound division.

“This year, I will be a world champion at 135, no ifs, ands or buts about it.”
The Delperdang bout is Lundy’s first since challenging pound-for-pound star Terence Crawford for the World Boxing Organization (WBO) World Super Lightweight Title in New York, a fight Lundy accepted, injured knee and all, knowing he’d eventually need surgery to get back to 100 percent.

At his peak, Lundy rose to No. 1 in the World Boxing Council (WBC) rankings in 2012 and was still a top 10 contender when he faced Crawford in February. Fighting and defeating Delperdang would be the first step in Lundy’s quest to get back into the rankings and in contention to fight for a major title at 135, where he’s always been the most comfortable.
“Starting Dec. 30th and going into 2017, we will fight at 135 pounds and fight for a world title. Hank deserves it,” said Lundy’s promoter, CES Boxing president Jimmy Burchfield Sr.

“He hasn’t backed down from anybody. [Raymundo] Beltran, [John] Molina, [Richar] Abril, [Thomas] Dulorme, Crawford, [Viktor] Postol – no one in boxing has done that. We came up to 140 because no legitimate 135-pounder wanted to fight Hank. Now we’re back in business.”
The hardest part for Lundy while sitting out the past eight months watching others make their climb in the 135-pound division was having to take time off from training. As Lundy puts it, “I’m an athlete,” so it ate away at him knowing he couldn’t do what he loved most immediately following the surgery.

“I couldn’t do anything,” Lundy said. “I’m not going to lie to you, I almost went into depression mode. To go from doing everything on your own to having to rely on someone to help you every step of the way, my wife is a blessing from God. She helped me through that.
“I kid you not, two to three weeks after the surgery, I was up and down the steps walking around. I still had the staples in my leg when I was in the gym hitting the bag. I was in the gym working and people were like, ‘Man, you’re crazy!’

“Even the doctor told me I was crazy. The doctor knows best, but the man upstairs knows what’s better. I put it in God’s hands. Look at me now. I’m stronger than ever.”

While neither Lundy or Burchfield offer any excuses for Lundy’s performance in the Crawford bout – “Under no circumstances would he pull out of the fight,” Burchfield said – Lundy acknowledged he feels better, faster and stronger since the surgery.
“I’ve been on my toes dancing,” he said. “I’m doing 12 rounds on my toes. I feel great again. It’s like when you get a flat tire. Once you get it fixed, you hit the road again. That’s how I feel.”

Burchfield likened Lundy’s spirit to that of former CES Boxing contenders who’ve defied the odds through the years, among them five-time world champion Vinny Paz, the subject of the biopic film “Bleed For This,” and former super lightweight contender “Sucra” Ray Oliveira.
“These guys were all warriors,” Burchfield said. “They fight.”

Lundy’s opponent next Friday is a relative unknown in the lightweight division, but has stopped nine of 11 opponents with his only loss coming by a narrow majority decision to lightweight contender Rickey Edwards.

The one thing he lacks is Lundy’s experience in high-profile fights; in addition to his HBO main event showdown with Crawford in February, Lundy challenged Dulorme on HBO in December of 2015 and defeated Angelo Santana on Showtime in 2014. Other previous opponents include Postol, the former WBC World Super Lightweight champion, and Abril, a former World Boxing Association (WBA) World Lightweight title-holder, whom Lundy beat in 2010.

“Everyone may say, “What’s Hank doing fighting a guy who’s 10-1?’ At the end of the day, he’s the only guy willing to step up,” Lundy said. “I know he’ll bring everything into the ring to defeat ‘Hammerin’’ Hank. A win over me puts his name on the radar.
“I’m hungry and he’s hungry, too. We’re ready for war. It’s going to be a great show.”

Tickets for the Dec. 30th Lundy-Delperdang bout are priced at $30.00, $50.00, $100.00 and $250.00 and are available by phone at (513) 409-2663 or online at www.eventbrite.com. For more information, visit www.boomfitnesscenter.com, www.cesboxing.com, www.twitter.com/cesboxing or www.facebook.com/cesboxing or follow CES Boxing on Instagram at @CESBOXING.