Jimmy Burchfield’s CES Boxing presents one of the most highly-anticipated fight cards of 2014 has a little bit of something for every boxing fan, from a world title fight to the long-overdue return of an undefeated fan-favorite.

The title, “Winner Take All,” is fitting considering the winner of the Shelito Vincent-Jackie Trivilino in the 10-round main event tonight at Twin River Casino will take home the vacant Universal Boxing Federation (UBF) female super bantamweight world title.

A fight more than a year in the making, Vincent-Trivilino promises to deliver non-stop action, similar to Vincent’s bout against the gritty Angel Gladney in May of 2013, a fight in which both sides traded blows for eight full rounds. Trivilino (9-8-3, 1 KO), of Plattsburgh, N.Y., is an offensive-minded who comes forward, doesn’t mind taking punishment in order to dish it out and will challenge anyone anywhere at any given time.

Vincent (12-0, 1 KO), herself a former women boxing title-holder now ranked No. 4 in the WBC, is aiming for her first world title in what will be her toughest to date. Vincent defeated Gladney for a women’s international more than a year ago by unanimous, winning at least seven of the eight rounds on all three scorecards.

“What a fight card!” said CES president Jimmy Burchfield Sr. “This is the best of both worlds. With Vincent and Trivlino, you have two of the best in women’s boxing”

Those words were echoed by Michael Campbell, president of the Universal Boxing Federation. “This terrific match-up of two boxers dedicated to their profession epitomizes what the UBF represents.”

Both fighters weighed in exactly at 122lbs. 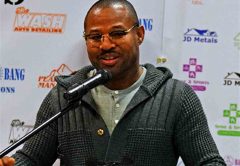